Persian cuisine refers to the traditional and modern styles of cooking related to Persia. Situated in the Middle East, the Persian culinary style is unique to Persia, though has historically both influenced and has been influenced by Iran’s neighbouring regions at various stages throughout its history. Specifically, these have been mutual culinary influences to and from Mesopotamian cuisine, Anatolian cuisine, and especially the Central Asian cuisine. Many foods famously associated with Middle Eastern, and indeed World cuisine have their origins in Persia, such as kabob and ice cream.
These cuisines which includes a wide variety of foods ranging from "Chelow Kabob" (Barg, Koobideh, Joojeh, Soltani, Kenjeh, and others), "Khoresht" (Ghemieh, Ghormeh Sabzi, Fesenjoon, Baghlaghatogh), "Polo" (white rice alone or with addition of meat and/or vegetables and herbs, including Zereshk Polo and others), and a diverse variety of salads, pastries, and drinks specific to different parts of Iran. To achieve a balanced taste, characteristic Persian flavourings such as saffron, dried limes, cinnamon, and parsley are mixed delicately and used in some speciality dishes.
The traditional drink accompanying Persian dishes is doogh, a combination of yogurt, still or carbonated water, salt, and dried mint 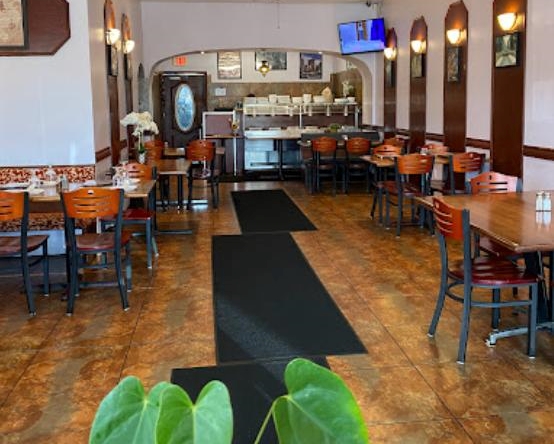 PLEASE LET YOUR SERVER KNOW IF YOU HAVE ANY FOOD ALLERGIES. MENU PRICES ARE SUBJECT TO CHANGE WITHOUT NOTICE DUE TO MARKET VALUES. TAXES & GRATUITIES NOT INCLUDED. PLEASE NOTE GROUPS OF 10 OR MORE A 15% GRATUITY WILL APPLY. PHOTO SHOWN ARE FOR REFERENCES ONLY, DISHES SERVED MAY NOT BE EXACTLY THE SAME